Improving the containment of a freshwater invader using eDNA Exclusion or containment barriers are often used to prevent the spread of invasive alien species in waterways such as rivers and streams. Determining appropriate locations for the construction of these barriers relies on precise knowledge of species distributions. eDNA monitoring was shown to improve the distribution data of redfin perch (Perca fluviatilis), a predatory invasive fish in Australia. eDNA monitoring has detected the presence of redfin perch further upstream of sites where conventional techniques have detected the fish. This information was used to determine the optimal location for the placement of an exclusion barrier, ensuring that redfin perch are prevented from encroaching into critical breeding grounds of the endangered southern pygmy perch, Nannoperca australis.

Jonas obtained his Bachelor and Master of Science in Biology at the University of Leuven (Belgium) and completed his PhD focused on monitoring freshwater communities using eDNA metabarcoding in 2018. Jonas developed a number of pioneering techniques during his PhD, including the detection of spawning in a threatened species using eDNA and the use of an innovative in-silico pipeline for optimising primers for metabarcoding projects. His analytical and empirical approach has resulted in him commencing a new position in 2019 at the Foundazione Edmund Mach in Trentino Italy as a lead researcher within the Eco-AlpsWater project. Jonas still remains as an affiliate of the EcoDNA team providing his analytical expertise for some key projects. 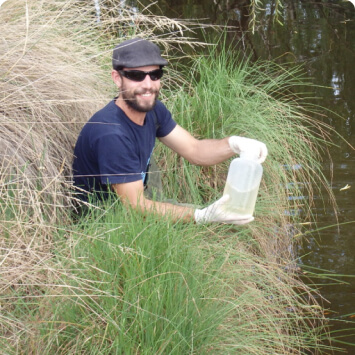